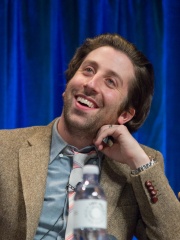 Simon Maxwell Helberg (born December 9, 1980) is an American actor, comedian and musician. He is known for playing Howard Wolowitz in the CBS sitcom The Big Bang Theory (2007–2019), for which he won a Critics' Choice Television Award for Best Supporting Actor in a Comedy Series, and as Cosmé McMoon in the film Florence Foster Jenkins (2016), which earned him a Golden Globe Award nomination for Best Supporting Actor in a Motion Picture. Helberg has appeared on the sketch comedy series MADtv and is also known for his role as Moist in Joss Whedon's web miniseries Dr. Read more on Wikipedia

Since 2007, the English Wikipedia page of Simon Helberg has received more than 5,791,561 page views. His biography is available in 41 different languages on Wikipedia making him the 2,662nd most popular actor.