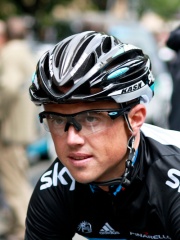 Simon Gerrans (born 16 May 1980) is an Australian former professional road bicycle racer, who rode professionally between 2005 and 2018, for the AG2R Prévoyance, Crédit Agricole, Cervélo TestTeam, Team Sky, Orica–Scott and BMC Racing Team squads. He currently works as an athlete intern at Goldman Sachs in London.Gerrans was a two-time winner of the Australian National Road Race Championships, having won the title in 2012, and 2014. Aside from his National Championship successes, his biggest triumphs were winning the Tour Down Under a record four times, and getting the better of one-day races such as the 2009 GP Ouest-France, the 2012 Milan–San Remo, the 2012 and 2014 Grand Prix Cycliste de Québec, the 2014 Liège–Bastogne–Liège, and stage wins in all three Grand Tours. Read more on Wikipedia

Among CYCLISTS In Australia