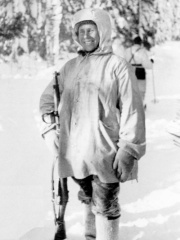 Simo Häyhä (Finnish: [ˈsimo ˈhæy̯hæ] (listen); 17 December 1905 – 1 April 2002) was a Finnish military sniper in the Second World War during the 1939–1940 Winter War against the Soviet Union. He used a Finnish-produced M/28-30, a variant of the Mosin–Nagant rifle, and a Suomi KP/-31 submachine gun. He is believed to have killed over 500 men during the Winter war (including 259 killed by sniper rifle), the highest number of sniper kills in any major war.Häyhä estimated in his private war-time diary that he shot around 500 enemy soldiers. Read more on Wikipedia

Since 2007, the English Wikipedia page of Simo Häyhä has received more than 6,106,475 page views. His biography is available in 48 different languages on Wikipedia. Simo Häyhä is the 25th most popular military personnel (up from 28th in 2019), the 2nd most popular biography from Finland (up from 3rd in 2019) and the most popular Finnish Military Personnel.

Simo Häyhä is most famous for his service in the Winter War, where he was credited with killing over 500 Soviet soldiers.

Among military personnels, Simo Häyhä ranks 25 out of 1,466. Before him are Pyrrhus of Epirus, Ptolemy I Soter, Wilhelm Keitel, Friedrich Paulus, Oda Nobunaga, and Cesare Borgia. After him are Vercingetorix, Ratko Mladić, Alfred Dreyfus, Roland, Douglas MacArthur, and Jochi.

Among MILITARY PERSONNELS In Finland