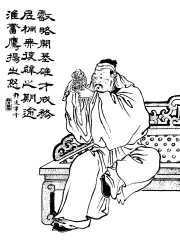 Sima Shi (pronunciation ) (208 – 23 March 255), courtesy name Ziyuan, was a military general and regent of Cao Wei during the Three Kingdoms period of China. In 249, he assisted his father Sima Yi in overthrowing the emperor Cao Fang's regent Cao Shuang, allowing the Sima family to become paramount authority in the state, and he inherited his father's authority after his father's death in 251. He maintained a tight grip on the political scene and, when the emperor, Cao Fang, considered action against him in 254, had him deposed and replaced with his cousin, Cao Mao. Read more on Wikipedia

Since 2007, the English Wikipedia page of Sima Shi has received more than 127,891 page views. His biography is available in 17 different languages on Wikipedia making him the 3,113th most popular politician.

Among people born in 208, Sima Shi ranks 3. Before him are Severus Alexander and Diadumenian.