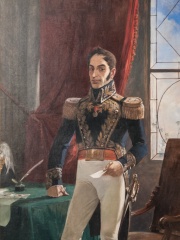 Simón José Antonio de la Santísima Trinidad Bolívar y Palacios Ponte-Andrade y Blanco (24 July 1783 – 17 December 1830), generally known as Simón Bolívar (Spanish: [siˈmom boˈliβaɾ] (listen), English: BOL-iv-ər, -⁠ar also US: BOH-liv-ar) and also colloquially as El Libertador, or the Liberator, was a Venezuelan military and political leader who led what are currently the countries of Venezuela, Bolivia, Colombia, Ecuador, Peru, and Panama to independence from the Spanish Empire. Bolívar was born into a wealthy family and as was common for the heirs of upper-class families in his day, was sent to be educated abroad at a young age, arriving in Spain when he was 16 and later moving to France. While in Europe he was introduced to the ideas of the Enlightenment, which later motivated him to overthrow the reigning Spanish in colonial South America. Read more on Wikipedia

Since 2007, the English Wikipedia page of Simón Bolívar has received more than 5,267,339 page views. His biography is available in 134 different languages on Wikipedia making him the 134th most popular politician.

Among politicians, Simón Bolívar ranks 133 out of 14,801. Before him are Otto I, Holy Roman Emperor, Recep Tayyip Erdoğan, Gustavus Adolphus of Sweden, Bayezid II, Mark Antony, and Deng Xiaoping. After him are Mustafa I, Pompey, Augusto Pinochet, Hatshepsut, Ho Chi Minh, and Clovis I.