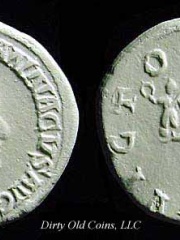 Mar. Silbannacus is a mysterious figure believed to have been a usurper in the Roman Empire during the time of Philip I (244-249), or between the fall of Aemilianus and the rise to power of Valerian (253). Silbannacus had been known only from a single coin, an antoninianus reputedly found in Lorraine, which is now at the British Museum. Read more on Wikipedia

Page views of Silbannacuses by language

Among politicians, Silbannacus ranks 7,048 out of 15,710. Before him are Gnaeus Flavius, Sid Watkins, Emperor An of Jin, Spytihněv I, Duke of Bohemia, John Beaufort, 1st Duke of Somerset, and Wilhelm Kube. After him are Ariobarzanes I of Cappadocia, Anne of Denmark, Electress of Saxony, Gallus Anonymus, Manuel Kantakouzenos, Walthari, and Win Myint.

Among people born in 1, Silbannacus ranks 20. Before him are Locusta, Vologases I of Parthia, Shimon bar Yochai, Sextus Afranius Burrus, Joanna, wife of Chuza, and Nicanor the Deacon. After him is Caesarius of Africa. Among people deceased in 300, Silbannacus ranks 9. Before him are Meng Huo, Achilles Tatius, Sabellius, Saturnin, Bhāsa, and Xenophon of Ephesus. After him are Marcia Otacilia Severa, Bongsang of Goguryeo, Minervina, Julia Cornelia Paula, Commodian, and Kartir.