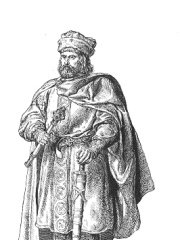 Siemomysł or Ziemomysł (died c. 950–960) was the third duke of Poland of the Piast dynasty, and the father of Poland's first Christian ruler, Mieszko I. He was listed by Gallus Anonymous in his Gesta principum Polonorum and was the son of Lestek, the second known Duke of the Polans. According to Gallus' account and historical research, Siemomysł has been credited with leaving the lands of Polans, Goplans and Masovians to his son Mieszko I, who further expanded them during his reign.According to modern Polish historian Henryk Łowmiański, Siemomysł aided the Ukrani uprising against the Germans in 954 AD. He supposedly reigned from around 930 (although some historians believe that he reigned from around 950). Siemomysł united the lands of Polanie, Goplanie, and Mazowszanie (however, some historians think that perhaps his father did it first). Read more on Wikipedia

Since 2007, the English Wikipedia page of Siemomysł has received more than 75,397 page views. His biography is available in 22 different languages on Wikipedia making him the 5,534th most popular politician.

Page views of Siemomysł by language

Among politicians, Siemomysł ranks 5,501 out of 14,801. Before him are Shoshenq III, Bakir Izetbegović, Frederick I, Duke of Austria, Milan Obrenović II, Prince of Serbia, Claudia Acte, and Nikolay Bobrikov. After him are Tadukhipa, Countess Palatine Maria Franziska of Sulzbach, Goh Chok Tong, Sabuktigin, Prince Philippe, Duke of Orléans, and Joaquín Balaguer.