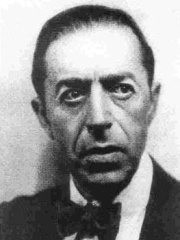 Sidney George Reilly (; c. 1873 – 5 November 1925)—known as "Ace of Spies"—was a Russian-born adventurer and secret agent employed by Scotland Yard's Special Branch and later by the Foreign Section of the British Secret Service Bureau, the precursor to the modern British Secret Intelligence Service (MI6/SIS). He is alleged to have spied for at least four different great powers, and documentary evidence indicates that he was involved in espionage activities in 1890s London among Russian émigré circles, in Manchuria on the eve of the Russo-Japanese War (1904–05), and in an abortive 1918 coup d'état against Vladimir Lenin's Bolshevik government in Moscow.Reilly disappeared in Soviet Russia in the mid-1920s, lured by Cheka's Operation Trust. British diplomat and journalist R. H. Bruce Lockhart publicised his and Reilly's 1918 exploits to overthrow the Bolshevik regime in Lockhart's 1932 book Memoirs of a British Agent. Read more on Wikipedia

Among politicians, Sidney Reilly ranks 8,474 out of 15,710. Before him are Archduke Rainer Ferdinand of Austria, Gebre Mesqel Lalibela, Prince George William of Hesse-Darmstadt, Princess Caroline Louise of Hesse-Darmstadt, Artabanus III of Parthia, and Julio Anguita. After him are Friedrich Arnold Brockhaus, Jean-Yves Le Drian, Princess Mary of Great Britain, Ashikaga Yoshihisa, Nepherites I, and Salonia Matidia.