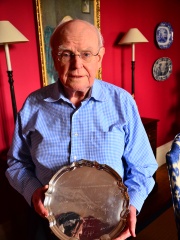 Eric Sidney Watkins (6 September 1928 – 12 September 2012), commonly known within the Formula One fraternity as Professor Sid or simply Prof, was an English neurosurgeon. Born in Liverpool, Watkins enrolled at the University of Liverpool where he graduated in 1952. He later served four years in the Royal Army Medical Corps before specialising in neurosurgery in Oxford and later, in London. Read more on Wikipedia

Among politicians, Sid Watkins ranks 8,374 out of 15,577. Before him are Wang Ming, William VI, Duke of Aquitaine, Edmund Stoiber, James Scott, 1st Duke of Monmouth, Arabella Churchill, and Anjang of Goguryeo. After him are Władysław Czartoryski, Yehuda Ashlag, Joachim Ernst, Duke of Anhalt, Demaratus of Corinth, Paul Ramadier, and Duke Peter Alexandrovich of Oldenburg.