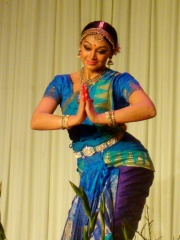 Shobana Chandrakumar Pillai (born March 21, 1970), better known mononymously as Shobana, is an Indian film actress and bharatanatyam dancer. She acts predominantly in Malayalam language, in addition to Telugu, Tamil, Hindi, Kannada and English language films. She has won two National Film Awards, one Kerala State Film Awards and numerous other awards.Shobana established herself as a leading actress in 1980s and 1990s. She has worked with directors such as Adoor Gopalakrishnan, G. Aravindan, K. Read more on Wikipedia

Since 2007, the English Wikipedia page of Shobana has received more than 2,073,885 page views. Her biography is available in 16 different languages on Wikipedia making her the 8,576th most popular actor.

Page views of Shobanas by language