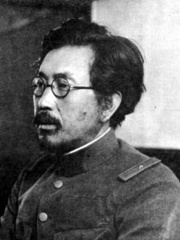 Surgeon General Shirō Ishii (石井 四郎, Ishii Shirō, [iɕiː ɕiɾoː]; 25 June 1892 – 9 October 1959) was a Japanese microbiologist, army medical officer, and war criminal who served as the director of Unit 731, a biological warfare unit of the Imperial Japanese Army. Ishii led the development and application of biological weapons at Unit 731 in Manchukuo during the Second Sino-Japanese War from 1937 to 1945, including the bubonic plague attacks at Chinese cities of Changde and Ningbo, and planned the Operation Cherry Blossoms at Night biological attack against the United States. Ishii and his colleagues also engaged in human experimentation, resulting in the death of over 10,000 people, most of them civilians or prisoners of war. They were later granted immunity in the International Military Tribunal for the Far East by the United States government in exchange for information and research for the U.S. Read more on Wikipedia

Shirō Ishii is most famous for his experiments on humans in Unit 731. He experimented on humans by injecting them with various diseases and chemicals to see how they would react.

Among physicians, Shirō Ishii ranks 65 out of 509. Before him are Gerhard Domagk, Christiaan Eijkman, Francesco Redi, Robert Bellarmine, Albert Sabin, and Louis Auguste Blanqui. After him are Hilary of Poitiers, Róbert Bárány, Jan Evangelista Purkyně, Cyril of Jerusalem, Frederick Banting, and Albert Szent-Györgyi.