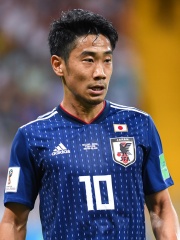 Shinji Kagawa (Japanese: 香川 真司 Kagawa Shinji [kaɡaɰa ɕindʑi]; born 17 March 1989) is a Japanese professional footballer who plays as a midfielder for Spanish club Real Zaragoza and the Japan national team. Kagawa began his professional career in his homeland with Cerezo Osaka before joining Borussia Dortmund in 2010. After two years with Dortmund, Kagawa signed for Manchester United on a four-year contract. Read more on Wikipedia

Since 2007, the English Wikipedia page of Shinji Kagawa has received more than 2,275,894 page views. His biography is available in 66 different languages on Wikipedia making him the 1,128th most popular soccer player.