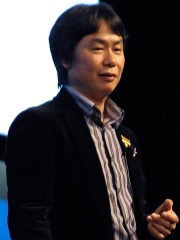 Shigeru Miyamoto (Japanese: 宮本 茂, Hepburn: Miyamoto Shigeru, pronounced [mijamoto ɕiɡeɾɯ]; born November 16, 1952) is a Japanese video game designer, producer and game director at Nintendo, where he serves as one of its representative directors. He is the creator of some of the most acclaimed and best-selling game franchises of all time, including Mario and The Legend of Zelda. Born in Sonobe, Japan, he graduated from Kanazawa Municipal College of Industrial Arts. Read more on Wikipedia

Since 2007, the English Wikipedia page of Shigeru Miyamoto has received more than 3,630,516 page views. His biography is available in 43 different languages on Wikipedia making him the most popular game designer.