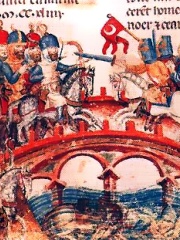 Shiban (Sheiban) or Shayban (Mongolian: Шибан, Shiban, also spelled Siban; Uzbek: Shaybon / Шайбон) was a prince of the early Golden Horde. He was a grandson of Genghis Khan, the fifth son of Jochi and a younger brother of Batu Khan who founded the Golden Horde. Read more on Wikipedia

Since 2007, the English Wikipedia page of Shiban has received more than 74,811 page views. His biography is available in 19 different languages on Wikipedia. Shiban is the 5,502nd most popular politician (down from 4,414th in 2019).

Page views of Shibans by language

Among politicians, Shiban ranks 5,502 out of 15,577. Before him are Chen Shui-bian, Lauri Kristian Relander, Rafael Caldera, Al-Afdal Shahanshah, Empress Masako, and Richeza of Poland, Queen of Sweden. After him are Charlotte Amalie of Hesse-Kassel, Matilda of Boulogne, Thyra, Artabasdos, Emperor Uda, and Mikhail Tomsky.

Among people born in 1200, Shiban ranks 17. Before him are George III of Georgia, Mstislav II of Kiev, Marcabru, Ghiyas ud din Balban, Canute II of Sweden, and Joan, Countess of Flanders. After him are Peire de Montagut, Louis IV, Landgrave of Thuringia, Gilbert Horal, Hadewijch, Nur ad-Din al-Bitruji, and Michael I Komnenos Doukas. Among people deceased in 1266, Shiban ranks 5. Before him are Berke, Ariq Böke, Manfred, King of Sicily, and Birger Jarl. After him are John I, Margrave of Brandenburg, Alghu, Andronikos II of Trebizond, Henry III the White, and Odo, Count of Nevers.