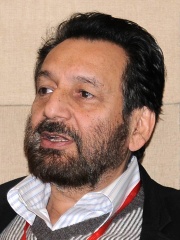 Shekhar Kapur (born 6 December 1945) is an Indian film director, actor, and producer, known for his works in Hindi cinema and international cinema. Part of the Anand family, Kapur became known in Bollywood with his recurring role in the TV series Khandan in the mid-1980s and his directorial debut in the cult Bollywood film Masoom in 1983, which won the Filmfare Critics Award for Best Movie for that year, before gaining widespread success with the science fiction film Mr. Read more on Wikipedia

Since 2007, the English Wikipedia page of Shekhar Kapur has received more than 1,674,361 page views. His biography is available in 23 different languages on Wikipedia making him the 985th most popular film director.