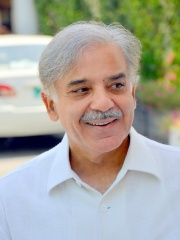 Mian Muhammad Shahbaz Sharif (Punjabi and Urdu: میاں محمد شہباز شریف‎, pronounced [miˈãː mʊˈɦəmːəd̪ ʃɛhˈbaːz ʃəˈriːf]; born 23 September 1951) is a Pakistani politician who is the current Leader of the Opposition in the National Assembly of Pakistan, in office since 20 August 2018. He has been a member of the National Assembly since 13 August 2018 and is the current President of the Pakistan Muslim League-N. Previously, he has served as the Chief Minister of Punjab three times in his political career making him the longest-serving Chief Minister of Punjab. Shehbaz was elected to the Punjab Provincial Assembly in 1988 and to the National Assembly in 1990. Read more on Wikipedia

Among politicians, Shehbaz Sharif ranks 11,117 out of 15,710. Before him are Mart Laar, Publius Cornelius Cethegus, Horace Greeley, Kevin Rudd, Dragan Đokanović, and Alejandro Maldonado. After him are Dobri Bozhilov, Machanidas, Æthelheard of Wessex, Tibor Szamuely, Daniel Webster, and Dragutin Šurbek.