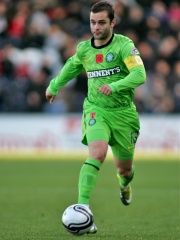 Shaun Richard Maloney (born 24 January 1983) is a Scottish former professional football player, who is now employed as a coach with the Belgium national team. He played for Celtic for over ten years during his playing career. Maloney also played for Aston Villa, Wigan Athletic, Chicago Fire, Hull City and the Scotland national team as an attacking midfielder or winger. Read more on Wikipedia

Since 2007, the English Wikipedia page of Shaun Maloney has received more than 475,775 page views. His biography is available in 33 different languages on Wikipedia making him the 9,076th most popular soccer player.

Among SOCCER PLAYERS In Malaysia

Among soccer players born in Malaysia, Shaun Maloney ranks 1. After him are Tadashi Takeda (1986) and Wan Zack Haikal (1991).