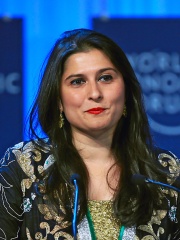 Sharmeen Obaid Chinoy (Urdu: شرمین عبید چنائے‎; born 12 November 1978) is a Pakistani-Canadian journalist, filmmaker and activist known for her work in films that highlight the inequality with women. She is the recipient of two Oscar award, two Academy Awards, seven Emmy Awards and a Knight International Journalism Award. In 2012, the Government of Pakistan honoured her with the Hilal-i-Imtiaz, the second highest civilian honour of the country and the same year Time magazine named her one of the 100 most influential people in the world. Read more on Wikipedia

Among film directors, Sharmeen Obaid-Chinoy ranks 1,579 out of 1,580. Before her are Benh Zeitlin, Vishal Bhardwaj, Mark Dindal, Jamie Babbit, Imtiaz Ali, and Gia Coppola. After her are Billy Ray, Charles Randolph, Allen Coulter, and Martin Wood.

Among FILM DIRECTORS In Pakistan