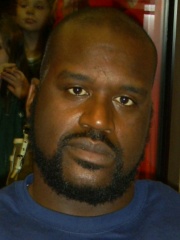 Shaquille Rashaun O'Neal ( shə-KEEL; born March 6, 1972), known commonly as "Shaq" ( SHAK), is an American former professional basketball player who is a sports analyst on the television program Inside the NBA. O'Neal is regarded as one of the greatest basketball players and centers of all time. He is a 7-foot-1-inch (2.16 m) and 325-pound (147 kg) center who played for six teams over his 19-year career in the National Basketball Association (NBA) and is a four-time NBA champion. After playing college basketball for the LSU Tigers, O'Neal was drafted by the Orlando Magic with the first overall pick in the 1992 NBA draft. Read more on Wikipedia

Shaquille O'Neal is most famous for being a professional basketball player. He played for the Los Angeles Lakers, Miami Heat, Phoenix Suns, Cleveland Cavaliers, and Boston Celtics. He was also in the 1992 Olympics and 1996 Olympics as a member of the United States men's national basketball team.

Among people born in 1972, Shaquille O'Neal ranks 6. Before him are Zinedine Zidane, Gwyneth Paltrow, Cameron Diaz, Eminem, and Ben Affleck. After him are The Notorious B.I.G., Dwayne Johnson, Wentworth Miller, Rivaldo, Jude Law, and Big Show.