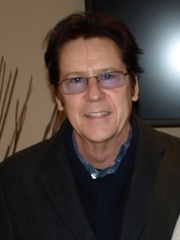 Michael Barratt (born 4 March 1948), known professionally as Shakin' Stevens, is a Welsh singer and songwriter. He was the UK's biggest-selling singles artist of the 1980s.His recording and performing career began in the late 1960s, although it was not until 1980 that his commercial success began. His most successful songs were nostalgia hits, evoking the sound of 1950s rock and roll and pop. Read more on Wikipedia

Among singers, Shakin' Stevens ranks 836 out of 3,541. Before him are Serhat, Renaud, Emma Calvé, Adam Lambert, Arash, and Rita Coolidge. After him are Jisoo, Halid Bešlić, Elisabeth Schumann, Minnie Riperton, Kate Ryan, and Carlos do Carmo.