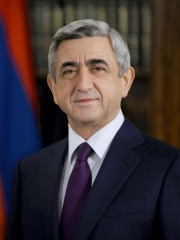 Serzh Azati Sargsyan (Armenian: Սերժ Ազատի Սարգսյան, pronounced [sɛɾʒ sɑɾɡəsˈjɑn]; born 30 June 1954) is an Armenian politician who served as the third President of Armenia from 2008 to 2018, and twice as the Prime Minister of Armenia from 2007 to 2008 and again from 17 to 23 April 2018, when he was forced to resign in the 2018 Armenian revolution. He won the February 2008 presidential election with the backing of the ruling Republican Party of Armenia, a party in which he serves as chairman, and took office in April 2008. Read more on Wikipedia

Among politicians, Serzh Sargsyan ranks 2,749 out of 15,577. Before him are Valdemar III of Denmark, Fausta, John Buchan, Grand Duchess Alexandra Pavlovna of Russia, Gerard de Ridefort, and Offa of Mercia. After him are Richard Walther Darré, Intef I, Habibullah Khan, Vicente Fox, Robert Peel, and Philip William, Elector Palatine.