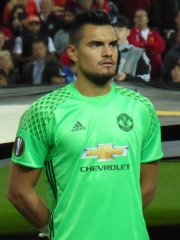 Sergio Germán Romero (Spanish pronunciation: [ˈseɾxjo xeɾˈman roˈmeɾo]; born 22 February 1987) is an Argentine professional footballer who plays as a goalkeeper for English Premier League club Manchester United and the Argentina national team. He made his debut with Racing Club in the Argentine Primera División in 2007 and then transferred to Dutch club AZ at the end of the season. He won the Eredivisie in 2009 and two years later joined Italian side Sampdoria. Read more on Wikipedia

Since 2007, the English Wikipedia page of Sergio Romero has received more than 2,179,993 page views. His biography is available in 58 different languages on Wikipedia making him the 1,966th most popular soccer player.