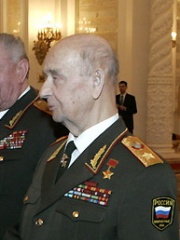 Sergey Leonidovich Sokolov (Russian: Серге́й Леони́дович Соколо́в; 1 July 1911 – 31 August 2012) was a Soviet military commander, Hero of the Soviet Union, and served as Minister of Defence of the Soviet Union from 22 December 1984 until 29 May 1987. Read more on Wikipedia

Since 2007, the English Wikipedia page of Sergey Sokolov has received more than 1,479 page views. His biography is available in 34 different languages on Wikipedia. Sergey Sokolov is the 405th most popular military personnel.

Sergey Sokolov is most famous for his involvement in the Russian space program. He was a Soviet scientist who helped design the first satellite, Sputnik 1, and the first human-made object to enter orbit around the Earth.

Among military personnels, Sergey Sokolov ranks 405 out of 1,466. Before him are Georg-Hans Reinhardt, Gustav Wagner, Ernst von Mansfeld, Nikolai Kuznetsov, Yoshiko Kawashima, and Alfred I, Prince of Windisch-Grätz. After him are John of Austria the Younger, Guillaume Brune, Hans-Jürgen Stumpff, Kul Tigin, Leonid Govorov, and Honda Tadakatsu.