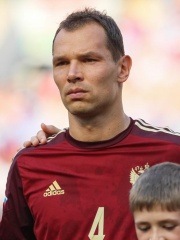 Sergei Nikolayevich Ignashevich (Russian: Сергей Николаевич Игнашевич, IPA: [sʲɪrˈgʲej nʲɪkɐˈla(j)ɪvʲɪtɕ ɪgnɐˈʂɛvʲɪtɕ]; born 14 July 1979) is a Russian former professional footballer who played as central defender and is currently the manager of Russian Football National League club Torpedo Moscow. He began his career at Torpedo Moscow, going up through the club's academy before briefly moving to twin club Spartak Moscow's academy and then starting his professional career with Spartak Orekhovo. He played for Lokomotiv Moscow and CSKA Moscow in his career, and has won Russian Premier League titles for both clubs, as well as the 2005 UEFA Cup Final with CSKA. Read more on Wikipedia