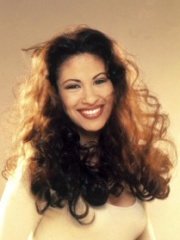 Selena Quintanilla Pérez (Spanish pronunciation: [seˈlena kintaˈniʝa ˈpeɾes]; April 16, 1971 – March 31, 1995), known mononymously as Selena, was an American singer and fashion designer. Called the "Queen of Tejano music", her contributions to music and fashion made her one of the most celebrated Mexican-American entertainers of the late 20th century. In 2020, Billboard magazine put her in third place on their list of "Greatest Latino Artists of All Time", based on both Latin albums and Latin songs chart. Read more on Wikipedia

Page views of Selenas by language

Among singers, Selena ranks 372 out of 3,528. Before her are Giuditta Pasta, Šaban Šaulić, Selena Gomez, Thalía, LP, and Senesino. After her are Dino Merlin, Alpha Blondy, Malcolm McLaren, Katy Perry, Harry Nilsson, and Karen Carpenter.