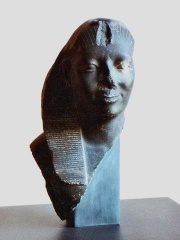 See Amenemhat, for other individuals with this name.Sekhemkare Amenemhat V was an Egyptian pharaoh of the 13th Dynasty during the Second Intermediate Period. According to Egyptologists Kim Ryholt and Darrell Baker, he was the 4th king of the dynasty, reigning from 1796 BC until 1793 BC. Read more on Wikipedia

Since 2007, the English Wikipedia page of Sekhemkare has received more than 52,637 page views. His biography is available in 22 different languages on Wikipedia. Sekhemkare is the 5,626th most popular politician (down from 5,416th in 2019).

Page views of Sekhemkares by language