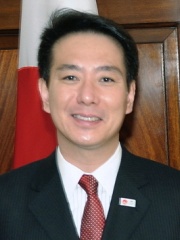 Seiji Maehara (前原 誠司, Maehara Seiji, born 30 April 1962) is a Japanese politician and was the leader of the Democratic Party from 1 September 2017 until its dissolution later that month. He has also been a member of the House of Representatives of Japan since 1993. Maehara was the leader of the Democratic Party of Japan (DPJ) from 2005 to 2006, and later served as Minister of Land, Infrastructure, Transport and Tourism and Minister of Foreign Affairs under the cabinets of Yukio Hatoyama and Naoto Kan, before resigning from the cabinet in March 2011 after he acknowledged receiving illegal donations from a South Korean national living in Japan. Read more on Wikipedia