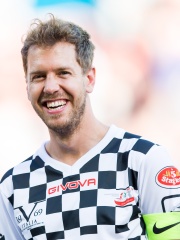 Sebastian Vettel (German pronunciation: [zeˈbasti̯a(ː)n ˈfɛtl̩] (listen); born 3 July 1987) is a German racing driver who competes in Formula One for Aston Martin, having previously driven for BMW Sauber, Toro Rosso, Red Bull and Ferrari. Vettel has won four World Drivers' Championship titles, which he won consecutively from 2010 to 2013. Vettel is the youngest World Champion in Formula 1, he also has the third most race victories (53) and podium finishes (122) and the fourth most pole positions (57).Vettel started his Formula One career as a test driver for BMW Sauber in 2006, making a one-off racing appearance in 2007. Read more on Wikipedia