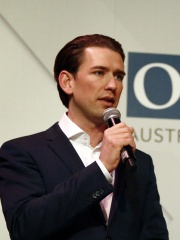 Sebastian Kurz (German: [zeˈbasti̯a(ː)n ˈkʊrts]; born 27 August 1986) is a former Austrian politician who twice served as chancellor of Austria, initially from December 2017 to May 2019 and then a second time from January 2020 to October 2021. Kurz was born and raised in Meidling, Vienna. He entered politics by joining the Young People's Party (JVP) in 2003 and rose through the ranks there over the following years. Read more on Wikipedia

Among politicians, Sebastian Kurz ranks 8,229 out of 15,577. Before him are Karl Vaino, Theodore I Palaiologos, Hosokawa Gracia, Han Seung-soo, Pinedjem II, and Lucjan Żeligowski. After him are William Frederick, Prince of Nassau-Dietz, Abiy Ahmed, Tribhuwana Wijayatunggadewi, John II, Duke of Brittany, Karl Gützlaff, and James Connolly.