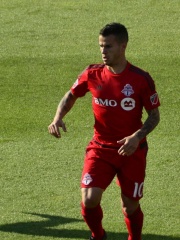 Sebastian Giovinco (Italian pronunciation: [seˈbastjan dʒoˈviŋko]; born 26 January 1987) is an Italian professional footballer who plays for Saudi Arabian club Al Hilal and the Italy national team as a forward. A quick and creative player on the ball, he was named one of the 100 best footballers in the world by The Guardian, FourFourTwo, and L'Équipe in 2015. He is the all-time top goalscorer for Canadian Championship and Major League Soccer (MLS) club Toronto FC. Giovinco began his professional career with Italian club Juventus in Serie B in 2006, and soon spent loan spells with Italian clubs Empoli and Parma. Read more on Wikipedia

Since 2007, the English Wikipedia page of Sebastian Giovinco has received more than 2,540,315 page views. His biography is available in 41 different languages on Wikipedia making him the 1,676th most popular soccer player.