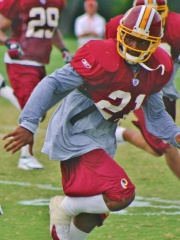 Sean Michael Maurice Taylor (April 1, 1983 – November 27, 2007) was an American football free safety who played for the Washington Redskins of the National Football League (NFL). He was drafted by the Redskins with the fifth overall pick of the 2004 NFL Draft where he played for four seasons until his murder in 2007. As a high school player, Taylor led Gulliver Prep to a Florida state championship and rushed for a state record 44 touchdowns in a season. Read more on Wikipedia

Since 2007, the English Wikipedia page of Sean Taylor has received more than 4,682,007 page views. His biography is available in 15 different languages on Wikipedia making him the 33rd most popular american football player.