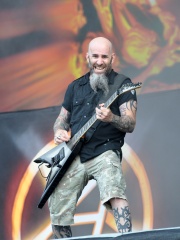 Scott Ian (born Scott Ian Rosenfeld, December 31, 1963) is an American musician, best known as the rhythm guitarist and co-founder of the thrash metal band Anthrax. Ian is the guitarist and a founding member of the crossover thrash band Stormtroopers of Death for which he is also the lyricist. He has hosted The Rock Show on VH1 and has appeared on VH1's I Love the... Read more on Wikipedia

Among musicians, Scott Ian ranks 1,596 out of 2,675. Before him are Mike Ratledge, Dan Hartman, Paul Bostaph, Butch Vig, Max Weinberg, and George Lynch. After him are Buddy Miles, The Rev, Jack Johnson, Percy Heath, Juan Atkins, and Edwin Hawkins.