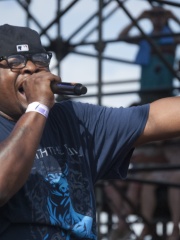 Brad Terrence Jordan (born November 9, 1970), better known by his stage name Scarface, is an American rapper, record producer, and politician, best known as a member of the Geto Boys, a hip hop group from Houston, Texas. He grew up in Houston and is originally from the city's South Acres (Crestmont Park) neighborhood. Read more on Wikipedia

Page views of Scarfaces by language

Among singers, Scarface ranks 2,959 out of 3,541. Before her are Paradise Oskar, Kamil Mikulčík, Sandra Oxenryd, Liz McClarnon, Nami Tamaki, and Jem. After her are Rykka, LaFee, Gromee, Alessandra Amoroso, Max Mutzke, and Elhaida Dani.