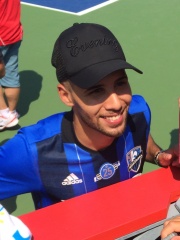 Saphir Sliti Taïder (Arabic: سفير سليتي تايدر‎; born 29 February 1992) is a French-born Algerian professional footballer who plays as a central midfielder for Canadian club Montreal Impact, and for the Algeria national team. After beginning professionally with Grenoble in 2010, Taïder spent most of his career in Italy, representing Bologna (two spells), Internazionale and Sassuolo. Over six-and-a-half seasons, he made 172 appearances and scored 10 goals in Serie A. Taïder represented his place of birth, France, in youth international level. Read more on Wikipedia

Since 2007, the English Wikipedia page of Saphir Taïder has received more than 284,828 page views. His biography is available in 28 different languages on Wikipedia making him the 5,465th most popular soccer player.