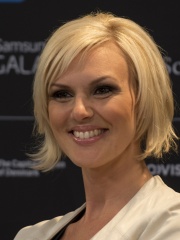 Sanna Viktoria Nielsen (born 27 November 1984) is a Swedish singer and television presenter. On her seventh attempt, she won Melodifestivalen in 2014 with the song "Undo" and so represented Sweden in the Eurovision Song Contest 2014 in Copenhagen, Denmark, finishing in 3rd place overall. Sanna was one of the Eurovision Song Contest 2015 commentators for Sweden and hosted Melodifestivalen 2015 along with comedian Robin Paulsson. Read more on Wikipedia

Since 2007, the English Wikipedia page of Sanna Nielsen has received more than 143,596 page views. Her biography is available in 53 different languages on Wikipedia making her the 1,533rd most popular singer.