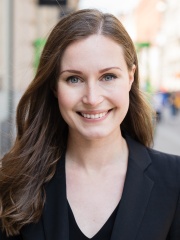 Sanna Mirella Marin (Finnish pronunciation: [ˈsɑnːɑ ˈmirelːɑ ˈmɑriːn]; born 16 November 1985) is a Finnish politician who has been the Prime Minister of Finland since 10 December 2019. A member of the Social Democratic Party, she has been a member of the Parliament of Finland since 2015 and served as the Minister of Transport and Communications from 6 June to 10 December 2019. Read more on Wikipedia

Among politicians, Sanna Marin ranks 8,776 out of 15,710. Before her are Neferkare Tereru, Manius Acilius Glabrio, Mahmoud Jibril, Ḫattušili II, Ariarathes V of Cappadocia, and Robert II, Count of Dreux. After her are Christian Metz, Xie of Xia, Porfirio Lobo Sosa, Pōmare III, Salih Muslim, and Lembitu.