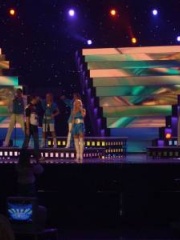 Sandra Oxenryd (born 1 October 1982 in Kristinehamn) is a Swedish singer who won Fame Factory in 2005, and represented Estonia in the Eurovision Song Contest 2006. Oxenryd is a former economics student and floorball player. Aged eleven, she started her singing career by performing on national television. Read more on Wikipedia

Since 2007, the English Wikipedia page of Sandra Oxenryd has received more than 20,665 page views. Her biography is available in 18 different languages on Wikipedia making her the 2,454th most popular singer.

Among singers, Sandra Oxenryd ranks 2,468 out of 3,001. Before her are Guy Sebastian, Marta Roure, Nam Woo-hyun, Pablo Ruiz, Russian Red, and Monika Kuszyńska. After her are Freddie, Lucía Pérez, Marlayne, Samuel, Kristine Opolais, and Kurt Elling.