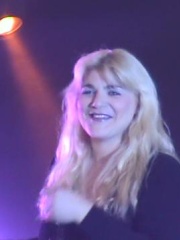 Sandra Caldarone (born 15 October 1972), better known as Sandra Kim, is a Belgian singer of Italian descent who won the Eurovision Song Contest 1986. Her father was an Italian immigrant from Torrebruna in the Province of Chieti in the Abruzzo region of Italy.At the time of her Eurovision win, she was only 13 years old, making her the youngest winner of the contest, even though the lyrics of her song "J'aime la vie" ("I love life") claim her to be 15; the Swiss petitioned to have the song disqualified after her real age was revealed. This petition ended up failing and Kim went on to win that year's Eurovision Song Contest. Read more on Wikipedia

Among singers, Sandra Kim ranks 929 out of 3,541. Before her are Lena Katina, Mel B, Indila, Rosario Flores, Mango, and Aino Ackté. After her are Johnny Mathis, Betty Curtis, Lucho Gatica, Ian Hunter, Sumi Jo, and Chiquito de la Calzada.