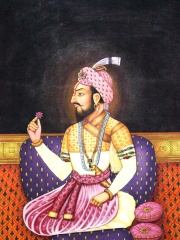 Sambhaji Bhosale (14 May 1657 – 11 March 1689) was the second Chhatrapati of the Maratha Empire, ruling from 1681 to 1689. He was the eldest son of Shivaji, the founder of the Maratha Empire. Sambhaji's rule was largely shaped by the ongoing wars between the Maratha Empire and the Mughal Empire, as well as other neighbouring powers such as the Siddis, Mysore and the Portuguese in Goa. Read more on Wikipedia

Since 2007, the English Wikipedia page of Sambhaji has received more than 4,645,183 page views. His biography is available in 23 different languages on Wikipedia. Sambhaji is the 3,167th most popular politician (up from 3,636th in 2019), the 97th most popular biography from India (up from 101st in 2019) and the 32nd most popular Indian Politician.

Page views of Sambhajis by language

Among politicians, Sambhaji ranks 3,167 out of 15,710. Before him are Taira no Kiyomori, Abu'l-Fida, Vuk Branković, Charles III, Duke of Parma, Berenice I of Egypt, and Al-Wathiq. After him are Telipinu, Emperor Go-Sai, Radomir Putnik, Tahmasp II, Otto I, Duke of Saxony, and Nicholas Kanabos.