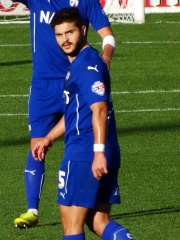 Samy Sayed Morsy (born 10 September 1991) is a professional footballer who plays as a defensive midfielder for English Championship club Middlesbrough and the Egypt national team. He joined the Port Vale youth set-up in 2008, having been released from the Wolverhampton Wanderers Academy. Winning his debut in February 2010, he turned professional at the club in the summer. Read more on Wikipedia

Since 2007, the English Wikipedia page of Sam Morsy has received more than 346,786 page views. His biography is available in 25 different languages on Wikipedia making him the 9,973rd most popular soccer player.