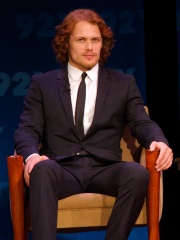 Sam Roland Heughan (; born 30 April 1980) is a Scottish actor and producer. He is best known for his starring role as Jamie Fraser in the Starz historical drama series Outlander (2014–present), for which he won the People's Choice Award for Favorite Cable Sci-Fi/Fantasy TV Actor, the Saturn Award for Best Actor on Television, and received a nomination for the Critics' Choice Television Award for Best Actor in a Drama Series. Heughan also starred in films, such as the spy comedy The Spy Who Dumped Me (2018) and the superhero action film Bloodshot (2020). Read more on Wikipedia

Since 2007, the English Wikipedia page of Sam Heughan has received more than 8,580,405 page views. His biography is available in 22 different languages on Wikipedia making him the 4,303rd most popular actor.