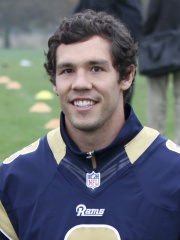 Samuel Jacob Bradford (born November 8, 1987) is a former American football quarterback who played in the National Football League (NFL) for nine seasons, most notably with the St. Louis Rams and Minnesota Vikings. He was also a member of the Philadelphia Eagles and Arizona Cardinals. Read more on Wikipedia

Since 2007, the English Wikipedia page of Sam Bradford has received more than 4,317,064 page views. His biography is available in 15 different languages on Wikipedia making him the 43rd most popular american football player.