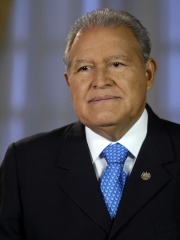 Salvador Sánchez Cerén (Spanish pronunciation: [salβaˈðoɾ ˈsantʃes seˈɾen]; born 18 June 1944) is a Salvadoran politician who served as the 45th President of El Salvador between 1 June 2014 and 1 June 2019. He took office on 1 June 2014, after winning the 2014 presidential election as the candidate of the left-wing Farabundo Martí National Liberation Front (FMLN). He previously served as Vice President from 2009 to 2014. Read more on Wikipedia

Among politicians, Salvador Sánchez Cerén ranks 6,619 out of 15,710. Before him are George II, Landgrave of Hesse-Darmstadt, Jacob Stainer, Perctarit, William I, Count of Hainaut, Luis de Requesens y Zúñiga, and Jeremy Corbyn. After him are Sigobert the Lame, John Connally, Emperor Gao of Southern Qi, Prince Sixtus of Bourbon-Parma, Sansang of Goguryeo, and Michel Rocard.

Others born in El Salvador

Among POLITICIANS In El Salvador