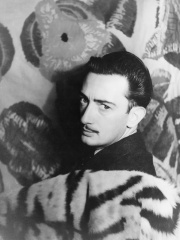 Salvador Domingo Felipe Jacinto Dalí i Domènech, 1st Marquess of Dalí de Púbol (, Catalan: [səlβəˈðo ðəˈli], Spanish: [salβaˈðoɾ ðaˈli]; 11 May 1904 – 23 January 1989) was a Spanish surrealist artist renowned for his technical skill, precise draftsmanship and the striking and bizarre images in his work. Born in Figueres, Catalonia, Dalí received his formal education in fine arts at Madrid. Influenced by Impressionism and the Renaissance masters from a young age, he became increasingly attracted to Cubism and avant-garde movements. Read more on Wikipedia

Since 2007, the English Wikipedia page of Salvador Dalí has received more than 9,328,755 page views. His biography is available in 170 different languages on Wikipedia making him the 6th most popular painter.

Among painters, Salvador Dalí ranks 6 out of 1,258. Before him are Michelangelo, Vincent van Gogh, Pablo Picasso, Rembrandt, and Raphael. After him are Frida Kahlo, Albrecht Dürer, Peter Paul Rubens, Claude Monet, Caravaggio, and Francisco Goya.