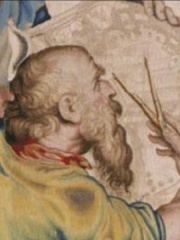 Salomon de Brosse (1571 – 9 December 1626) was an influential early 17th-century French architect, a major influence on François Mansart. Salomon was born in Verneuil-en-Halatte, Oise, into a prominent Huguenot family, the grandson through his mother of the designer Jacques I Androuet du Cerceau and the son of the architect Jean de Brosse. Read more on Wikipedia

Among people born in 1571, Salomon de Brosse ranks 12. Before him are Mulla Sadra, Emperor Go-Yōzei, Thomas Mun, Frederick de Houtman, Willem Blaeu, and Ferdinand, Prince of Asturias. After him is Pietro Aldobrandini. Among people deceased in 1626, Salomon de Brosse ranks 15. Before him are Christian the Younger of Brunswick, Ferdinando Gonzaga, Duke of Mantua, Louis V, Landgrave of Hesse-Darmstadt, Pietro Cataldi, Théophile de Viau, and Marino Ghetaldi. After him are Paul Bril, Edmund Gunter, John Ernest I, Duke of Saxe-Weimar, Edward Alleyn, and Malik Ambar.