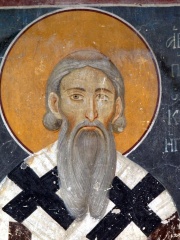 Saint Sava (Serbian: Свети Сава / Sveti Sava), pronounced [sʋɛ̂ːtiː sǎːʋa], 1174 – 14 January 1236), known as the Enlightener, was a Serbian prince and Orthodox monk, the first Archbishop of the autocephalous Serbian Church, the founder of Serbian law, and a diplomat. Sava, born as Rastko Nemanjić (Serbian Cyrillic: Растко Немањић), was the youngest son of Serbian Grand Prince Stefan Nemanja (founder of the Nemanjić dynasty), and ruled the appanage of Hum briefly in 1190–92. He then left for Mount Athos, where he became a monk with the name Sava (Sabbas). Read more on Wikipedia

Saint Sava is most famous for founding the Serbian Orthodox Church.

Among religious figures, Saint Sava ranks 422 out of 2,272. Before him are Muhammad al-Baqir, Pope Stephen II, Peter the Hermit, Pope Stephen I, Michael I Cerularius, and Gregory the Illuminator. After him are Pope John V, Abu Mansur al-Maturidi, Alphonsus Liguori, Dionysius the Areopagite, Pope Eleutherius, and Margaret Mary Alacoque.

Among RELIGIOUS FIGURES In Serbia