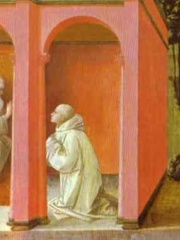 Saint Maurus, O.S.B. (or Maur), was the first disciple of Saint Benedict of Nursia (512–584). He is mentioned in Saint Gregory the Great's biography of the latter as the first oblate; offered to the monastery by his noble Roman parents as a young boy to be brought up in the monastic life. Four stories involving Maurus recounted by Gregory formed a pattern for the ideal formation of a Benedictine monk. Read more on Wikipedia

Since 2007, the English Wikipedia page of Saint Maurus has received more than 46,940 page views. His biography is available in 17 different languages on Wikipedia making him the 753rd most popular religious figure.

Among religious figures, Saint Maurus ranks 756 out of 2,001. Before him are Euphemia, William Tyndale, Agabus, Mary of Bethany, Muhammad ibn al-Hanafiyyah, and William Miller. After him are Raymond of Penyafort, Roger Etchegaray, Margaret of Hungary, La Voisin, Antipope Clement VIII, and Saint Susanna.