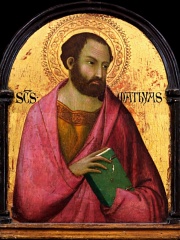 Matthias (Koine Greek: Μαθθίας, Maththías [maθˈθi.as], from Hebrew מַתִּתְיָהוּ Mattiṯyāhū; Coptic: ⲙⲁⲑⲓⲁⲥ; died c. AD 80) was, according to the Acts of the Apostles (written c. AD 80–90), chosen by the apostles to replace Judas Iscariot following the latter's betrayal of Jesus and his subsequent death. Read more on Wikipedia

Saint Matthias is most famous for being the apostle chosen to replace Judas Iscariot after Judas betrayed Jesus.

Among people born in 1, Saint Matthias ranks 6. Before him are James, son of Zebedee, Thomas the Apostle, Saint Stephen, Simon the Zealot, and Barnabas. After him are Pope Linus, Saint Veronica, Pope Anacletus, Barabbas, Thomas Bangalter, and Silas. Among people deceased in 80, Saint Matthias ranks 2. Before him is Philip the Apostle. After him are Berenice, Vologases II of Parthia, Lucius Annaeus Cornutus, and Kujula Kadphises.