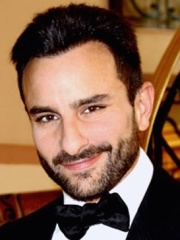 Saif Ali Khan (pronounced [ˈsɛːf əˈli ˈxaːn]; born Sajid Ali Khan on 16 August 1970) is an Indian film actor and producer. The son of actress Sharmila Tagore and cricketer Mansoor Ali Khan Pataudi, Khan made his acting debut in Yash Chopra's drama Parampara (1993), but achieved success with his roles in the romantic drama Yeh Dillagi and the action film Main Khiladi Tu Anari (both 1994). Khan's career prospect declined through much of the 1990s, and his biggest commercial success of the decade came with the ensemble drama Hum Saath-Saath Hain (1999). Read more on Wikipedia

Since 2007, the English Wikipedia page of Saif Ali Khan has received more than 14,137,230 page views. His biography is available in 54 different languages on Wikipedia making him the 3,958th most popular actor.