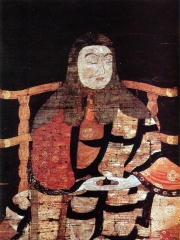 Saichō (最澄, September 15, 767 – June 26, 822) was a Japanese Buddhist monk credited with founding the Tendai school of Buddhism based on the Chinese Tiantai school he was exposed to during his trip to Tang China beginning in 804. He founded the temple and headquarters of Tendai at Enryaku-ji on Mount Hiei near Kyoto. He is also said to have been the first to bring tea to Japan. Read more on Wikipedia

Page views of Saichō by language

Among religious figures, Saichō ranks 1,164 out of 2,272. Before him are Macrina the Younger, Meher Baba, Raymond V, Count of Toulouse, Pope Anianus of Alexandria, Pope Tawadros II of Alexandria, and Abu Sa'id Abu'l-Khayr. After him are Menocchio, Nasrallah Boutros Sfeir, Adam Rainer, Jean Daniélou, Ahijah the Shilonite, and Bernardin Gantin.